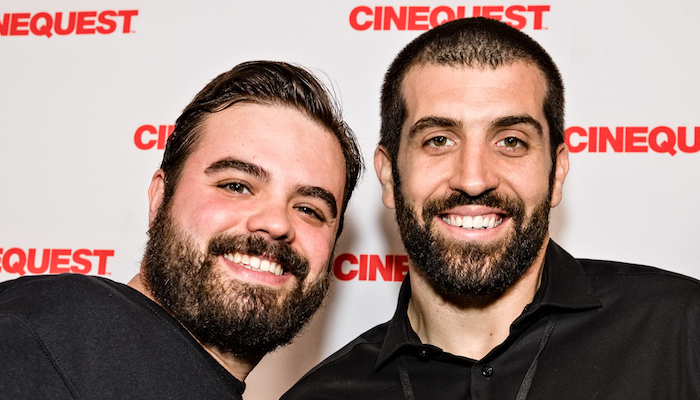 Film Poster and lead actors Benita Robledo and Joe Burke
Dependent’s Day had its world premiere at the Cinequest 2016 Film Festival where it won the Audience Award for Best Narrative Feature Comedy. Ruth Copland interviewed the writer/ director of the film, Michael David Lynch, and the leading actor, Joe Burke, after the world premiere. Dependent’s Day is a comedy about measuring up. Claimed as a ‘dependent’ by his successful breadwinning girlfriend Alice, Cam struggles to prove himself as he stumbles through different jobs and life’s obstacles in the hopes to live out his hollywood dream of being an actor and finally rise to the occasion. Having studied film at Columbia College, Chicago, Michael David Lynch headed to Hollywood and worked on films such as Inception, Die Hard 4, Ironman 2 and Transformers 2 and also produced several successful films including Drop, Between Us, and This Thing with Sarah. Michael David Lynch is making his feature film directorial debut with two films – the documentary Victor Walk, an eye opening documentary which follows former NHL all star Theo Fleury on his 10 day Victor Walk from Toronto to Ottawa, to bring awareness about child sexual abuse, promote healing to the survivors and stiffer laws for predators, – and the comedy Dependent’s Day, which recently won the Audience Award for Best Narrative Feature Comedy at the Cinequest film festival 2016. Michael David Lynch served as Director, Writer, Producer, Cinematographer and editor for Dependent’s Day.

Joe Burke is a filmmaker and actor who received his MFA from the American Film Institute and earned his BA degree in Film and a minor in Theater from Columbia College, Chicago. Joe has acted in several national commercials and has appeared on the critically acclaimed Showtime show Ray Donovan, and the popular Disney show Dog With A Blog. Recently Joe Burke is starring in the Screen Junkies new show Interns of F.I.E.L.D. a parody on Agents of S.H.I.E.L.D, where he plays a nerdy intern forced to clean up after the super heroes. Known for playing a witty, quirky character, Joe Burke embodies Dependent’s Day’s protagonist Cam, and his eternal struggle to claim his manhood.