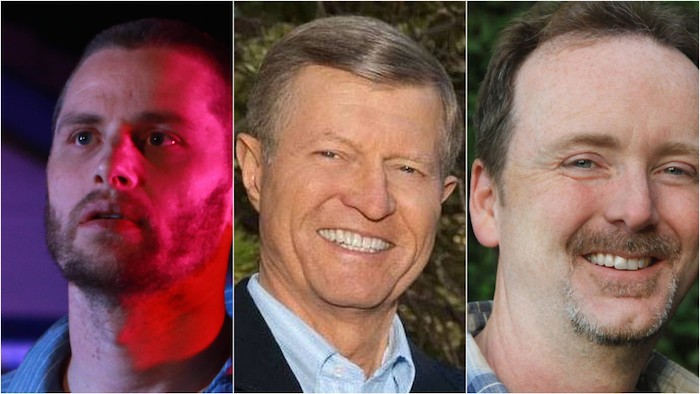 Ruth Copland features guests from What Happened In Vegas?, a shocking and heartbreaking documentary about three murder cases where all the victims were shot by the police. The film had its world premiere at Cinequest Film Festival 2017 and reveals a police department seemingly willing to go to any lengths to protect its image and hide its crimes. The film also features good cops trying to act with integrity within a broken system, and considers what has gone wrong and how it might be fixed.
Ramsey Denison, the director, producer and editor of the film decided to make the film after he witnessed police brutality, called 911 to report it and then was beaten up and arrested himself for doing so. He covers this story in the film as well as several cases including the police killing of West Point graduate Erik Scott. Ruth Copland interviews the father of this young man Bill Scott, the director Ramsey Denison, and editor Doug Blush, renowned for his work on Oscar-winning documentary 20 Feet From Stardom, Oscar-nominated documentary The Invisible War, and The Hunting Ground. Follow the film here What Happened in Vegas? Ramsey Dension is the director, producer and editor of What Happened in Vegas? In his career as an editor, Ramsey has worked for CBS, MTV, Discovery, A and E, Disney, ID, Spike, Tavel Channel, and Universal on shows such as the Emmy-nominated Naked and Afraid, Catfish: Untold stories, People Magazine Investigates, and Blood Relatives. Ramsey Denison is a huge fan of his beloved Seattle Seahawks football team and his dog Roman! William B (Bill) Scott is an award-winning writer and consultant. Bill appears in the documentary to talk about his son Erik Scott who was killed by the LVMPD. (Bill’s interview starts at approx 23 minutes). He is a Flight Test Engineer (FTE) graduate of the U.S. Air Force Test Pilot School and a licensed commercial pilot. In 12 years of military and civilian flight testing, plus evaluating aircraft for Aviation Week over 22 years, he logged approximately 2,000 hours of flight time on 80 aircraft types. He holds a Bachelor of Science degree in Electrical Engineering from California State University-Sacramento. For 22 years he was Rocky Mountain Bureau Chief for Aviation Week & Space Technology covering advanced aerospace and weapons technology, business, flight testing and military operations, wrote more than 2,500 stories for the magazine, and received 17 editorial awards. During a nine-year Air Force career, William B Scott served as aircrew on classified airborne-sampling missions, collecting nuclear debris by flying through radioactive clouds; an electronics engineering officer at the National Security Agency, developing space communications security systems for satellites; and an instrumentation and flight test engineer on U.S. Air Force fighter and transport aircraft development programs. Award-winning film-maker Doug Blush is the editorial consultant and producer for What Happened in Vegas? Doug has credits on more than 70 feature films and TV documentaries, including Oscar, Emmy, Grammy, Independent Spirit and Peabody Award winning projects, eight Sundance Film Festival features including one Grand Jury and two Audience Award winners, and three of the top 150 box office documentaries of all time. (Doug’s interview starts at approx 44 minutes). Widely considered one of the top documentary editors in the business, Doug Blush is a proud member of both the Academy of Motion Picture Arts and Sciences (AMPAS) and the American Cinema Editors (ACE) as well as teaching at Young Arts and University of Southern California. With over 20 years as an award-winning filmmaker, Doug Blush is currently focusing on top level documentary features and independent film productions through his Los Angeles-based company, MadPix, Inc.