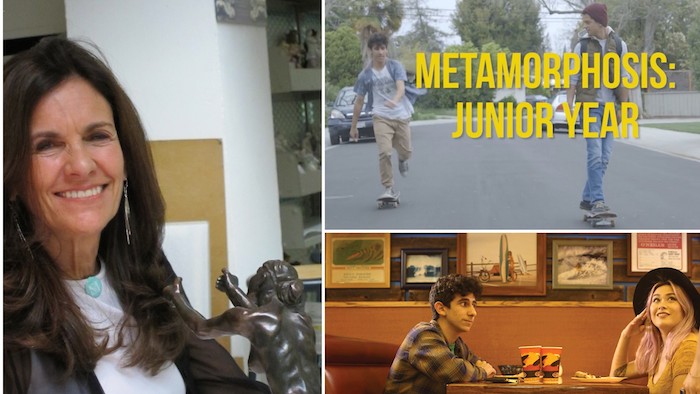 Ruth Copland interviews Betsy Franco and student film-makers involved with Metamorphosis Junior Year, a film about Ovid, an angsty teenage boy trying to make sense of life, love, sexuality, and friends, as he analyzes the world around him.

We talk about how James Franco conceived the project; Betsy’s novel and why she loves working with high school students; what it was like for the students working with Hollywood mentors; how teen issues can be universal; the power of art to convey meaning and even heal; and the remarkable achievement of high schoolers making a full-length feature film in their spare time.

The film was produced entirely by high school students with mentors from the film industry including main mentor and creator of the project James Franco, and supporting mentors/creators Iris Torres, Tom Franco, Jennifer Howell, Vince Jolivette, and Betsy Franco. The film is part of Elysium Bandini Studios and is the first philanthropic studio event created. The film has its world premiere at the Cinequest Film Festival, March 4. Metamorphosis Junior Year is based on the young adult novel by Betsy Franco. Betsy Franco, who majored in Studio Art at Stanford, is an award-winning author with over eighty books, including picture books, and poetry collections, some beautifully illustrated by previous guest of this show Michael Wertz. Betsy Franco also writes screenplays, plays, and sketch comedies, and compiles anthologies of teen writing. Metamorphosis Junior Year the novel is illustrated by Betsy’s son Tom Franco and read on audio book by her actor sons James Franco and Dave Franco. It is also the basis for a successful play. Betsy is an actor on TV and in film, and is a member of a sketch-comedy troupe called Suburban Squirrel. She is currently polishing the sequel to Metamorphosis—The Art of Love. For more info visit www.betsyfranco.com